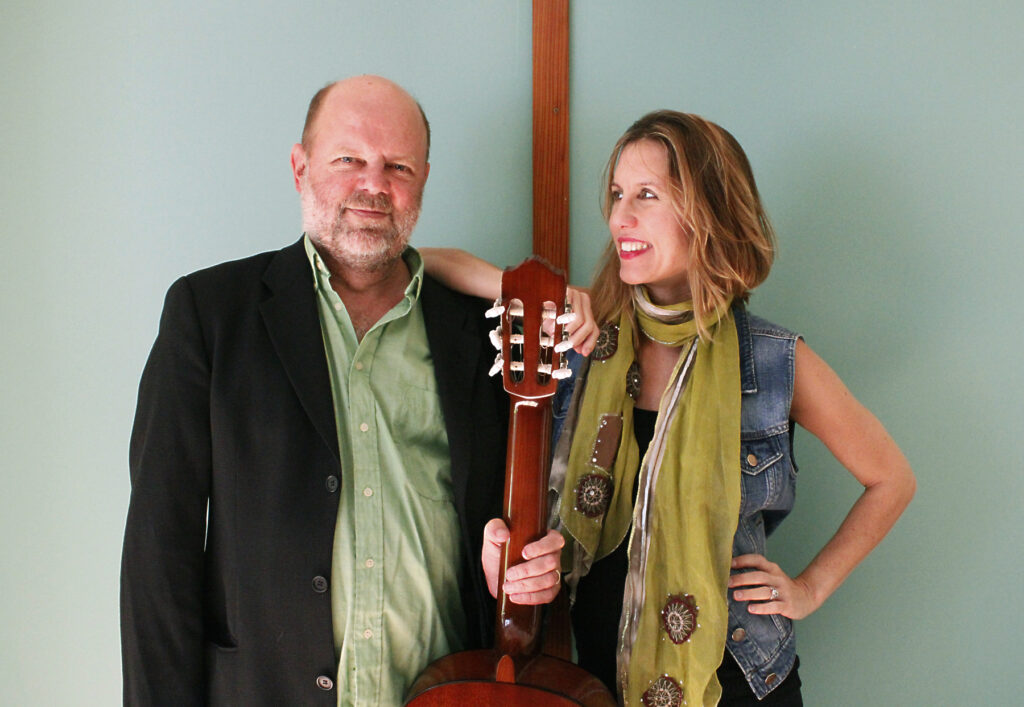 Lucinda Lane, your not-so-basic, so-called “IndieBossaSwingTwang” band, is a project in progress, moving in several directions but aiming at some new happy musical medium. The original band is built around the collaboration of singer/chanteuse Nicole Lvoff and guitarist-songwriter Joe Woodard, who have been concocting a songbook—somehow naturally sliding between original “standards-style” tunes, C&W-flavored numbers, bossa nova moves and more–for “awhile” now. As of 2020, the band has begun moving into phase two: starting work on their first record and hitting stages far and wide. And close.

Lucinda Lane’s vocal centerpiece, Lvoff, blessed with a clear, warm and present voice, is been a popular jazz singer around Santa Barbara for a few years, who released her debut album Here’s that Rainy Day in 2010. Woodard, a restless song and situation-maker, has been in many bands over many years, including the longstanding eclectic outfit Headless Household and the “rock and droll” band flapping, Flapping (Lvoff has guested on albums by both HH and fF–seeyoutonite). He is also VP of Household Ink Records (since 1987), which has signed Lucinda Lane to a non-exclusive contract, sensing something fresh and hit-worthy in the band’s sweet, tuneful, jazzy, twangy and only slightly ironic sound.

Lucinda Lane is an expandable and contractible group, which can function in settings from a duo to a dozen-strong little big band. Drummer Tom Lackner is often involved, and pedal steel/etcetera player Bill Flores, bassists Jim Connolly and Randy Tico, tenor saxman Tom Buckner have been “on the Lane,” with more guests and allies to come.

Household Ink Records is a little label with a few big ideas. It started out in 1987 as the in-house label for the new music combo Headless Household. Now, with 40+ titles in the HI catalogue, Household Ink is also a growing, thriving micro-conduit for assorted groups, including

Ideas are flung about. Genres stretch–new music, folk, rock, jazz, and an operative otherness. Forward motion is valued, as well as thinking in a sideways fashion. Somewhere, amidst confusion and polyism, come little moments of clarity and potential humor.